Unknown error occured while trying to send your request. Please try again.
Thank you for reaching out. Our sales team will contact you as soon as possible.
IPRoyal.com/Other proxies/Halo Infinite Proxy

One of the Best Halo Infinite Proxy Servers

The Halo franchise is a popular game for Xbox consoles. Over the years, it has become a fan favorite due to its amazing graphics and compelling storylines. With this in mind, this short read comprises a brief introduction to Halo Infinite, the latest game in the franchise, and some critical reasons why you need proxies to improve gameplay. 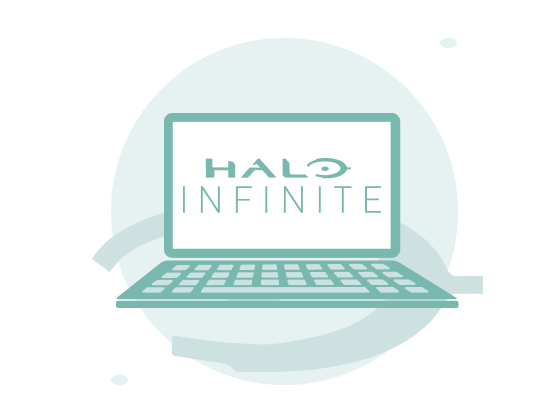 What Is Halo Infinite and Why Is It So Popular?

Halo Infinite is a first-person shooter game released in 2021 by Xbox Game Studios and is the sixth installment of the Halo franchise. The game is available on Xbox and Windows platforms with different subscription options. Users purchase the Campaign mode, while the multiplayer version is free to play. Finally, Halo Infinite supports split-screen on Xbox and LAN play on a local server.

Halo Infinite occurs in 2560 when AIs rebel against their creators, the United Nations Space Command. It is set in the Zeta Halo, and the protagonist is a Spartan soldier whose mission is to take down Cortana.

The campaign mode features an open world where players can roam about, explore, and capture bases swarming with enemies. That’s not all. There are also rescue missions where players rescue captured marines and destroy propaganda towers. Finishing these missions enables players to earn Valor, which is used to acquire vehicles and weapons.

The multiplayer version offers matches with up to 24 players with several modes, such as capture the flag and death mode, where players can pick abilities with special powers like camouflage and dashing.

The game offers a training mode where new players can refine their skills. During these sessions, players experiment with weapons and play against AI-controlled characters. Finally, the Halo Infinite soundtrack is fantastic, improving the game’s overall appeal.

Why Do You Need Proxies For Halo Infinite?

Let us start by answering a question that may be lingering on your mind: Proxies or VPN – which is better? In truth, both these tools offer similar functionality, but proxies tend to be faster since they don’t use complicated encryption mechanisms that slow down your internet connection.

Now, a proxy is an absolute necessity for various reasons. For starters, some game features may be limited to users in specific regions. This may become a nuisance, especially when you travel abroad and find that your favorite Halo Infinite feature is unavailable. In such a scenario, a proxy would be a lifesaver since it will offer an alternative IP address making it seem like you are connecting to the game from another region.

Another reason you need proxies for Halo Infinite is to reduce lagging and stuttering, which is often the most annoying issue for most gamers. Your IP address is changed with a proxy, and internet traffic is rerouted to a more direct link to the Halo Infinite servers. Keep in mind that proxies cannot boost your internet speed. However, they can improve your connection with the game servers if you use a proxy in a location close to them. Finally, you may require a proxy if your ISP limits your bandwidth consumption in high-level activities such as gaming.

What Are the Best Proxies for Halo Infinite?

You have several proxy options to consider for Halo infinite. Depending on your budget, you may opt for either residential or datacenter proxies. The latter is popular since it is pocket-friendly and offers unlimited bandwidth. However, we recommend static residential proxies as they have the same speed capabilities as their datacenter counterparts. Furthermore, residential proxy servers come from real devices with authentic ISP internet connections, so there’s no way to tell them apart from other players.

At IPRoyal, we pride ourselves as one of the top proxy providers in today’s market. Our dedicated team is ready to serve you and recommend the best proxies for Halo Infinite without leaving a dent in your wallet!

FAQ
What are Halo Infinite proxies?
These are tools utilized when playing Halo Infinite to hide the player's IP address by replacing it with a new one. Proxies also reroute users' internet traffic and make necessary changes to transferred data.
Why is it essential to use Halo Infinite proxies?
Proxies are vital for Halo Infinite gaming since they reduce lag issues and minimize bandwidth throttling. Overall, these tools help ensure that your Halo Infinite experience is void of interruptions.
Contact us
Email was successfully sent.
Close
Error. Something went wrong.
Close
Please enter text longer than 20 symbols
Close