Unknown error occured while trying to send your request. Please try again.
Thank you for reaching out. Our sales team will contact you as soon as possible.
IPRoyal.com/Other proxies/War Thunder Proxies

One of the Best War Thunder Proxies

Are you a diehard War Thunder player looking for ways to optimize your gaming experience on the platform? Why not utilize proxies? In this post, we’ll explain how these tools can improve your War Thunder experience and the best proxies to utilize. 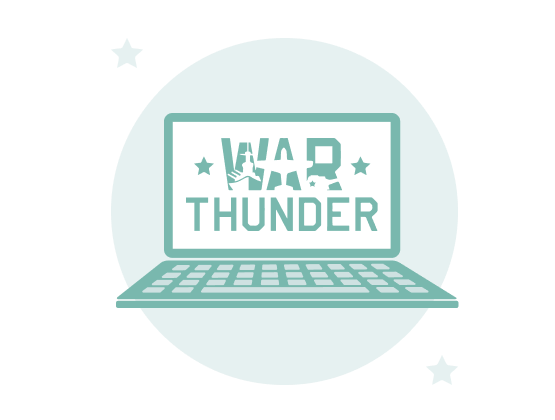 What Is War Thunder and Why Is It So Popular?

War Thunder is an online multiplayer warfare game officially released by Gaijin entertainment in 2016, a few years after the beta release. It is available on Windows, MacOS, Linux, PlayStation, and Xbox platforms and mainly focuses on combat involving air, land, and water-borne vehicles.

The game offers a wide variety of vehicles for players to utilize, including cars, aircrafts, and warships. Upon playing, you will notice that the game draws inspiration from vehicles used in World War II, World War I, and the Spanish Civil War.

The game has three game modes: Arcade, Realistic, and Simulator. Arcade is fast-paced, and most vehicles in this mode have boosted engine horsepower. Additionally, players use maps to see enemy locations and attacks. There is also a significant difference between aircraft and land battles, where the former has unlimited respawn capabilities while respawn is limited in the latter.

In realistic battles, the damage to tanks is not as significant, and the vehicles have the same design as in the historical battles. This mode enables players to engage in activities that earn them ‘spawn points.’ The air battles are also realistic since airplanes can incur real-world damages such as structural failures and overheating. Lastly, players have to land at air bases to reload.

Simulator battles mimic actual real-life combat. For one thing, players need to differentiate friend from foe. This is pretty easy since each team selects tanks from a particular nation. Additionally, the game starts with a fixed number of respawn points that cannot be replaced. In air battles, players view the cockpit as is the case in real-world battles. They can only control the aim and altitude of the aircraft.

The game has several events where players can play using different vehicles, such as futuristic tanks.

With all this realistic gameplay, why do you need proxies for War Thunder? What do you stand to gain by utilizing these tools?

Why Do You Need Proxies for War Thunder?

For online gamers, cutting-edge technology is a standard requirement to meet the needs of hard-core gaming. This includes beefy graphics cards, CPUs, and other hardware. However, it is worth noting that most gamers tend to ignore proxies, not knowing the benefits they offer.

Proxies are an essential ally in War Thunder for several reasons. First off, these tools help minimize latency-related issues. Why? You may have a great internet connection but still experience high ping, leading to latency. This may cause annoying situations during gameplay, such as lagging and stutters, that may even cost you matches. However, proxies easily fix this by rerouting your internet connection through their servers with alternative IP addresses. This way, you get a more direct link to the War Thunder server, thereby minimizing latency.

Another reason for using proxies while playing War Thunder is to avoid geo-restrictions. Certain game features or the entire game may not be available in your location, primarily due to government policies and copyright limitations. You can use a proxy to get a new IP address in a different location, making it look like you’re accessing the game from another country or continent.

You may also be utilizing automation tools to improve War Thunder gameplay. This violates the game’s terms of service, and you will be banned upon detection. Therefore, it is best to utilize authentic residential proxies to make your bots look like genuine human players.

Before we get to the best proxies for War Thunder, which should you go with? Proxies or VPNs? Generally, proxies are preferred since they are faster than VPNs. This is because the latter tends to utilize complex data encryption methods that reduce connection speed.

What Are the Best Proxies for War Thunder?

While both these proxies offer much in terms of functionality, datacenter proxies are more popular. These proxies come at pocket-friendly prices, are relatively fast, and have no bandwidth limitations. However, it is worth noting that they are less reliable since their IP addresses are generated in cloud servers. Hence, we recommend static residential proxies as the best option for War Thunder since they use IP addresses sourced from real users, making them significantly more reliable. At IPRoyal, we offer reliable proxy services to streamline your War Thunder experience and ensure that nothing interrupts your gameplay.

FAQ
What are War Thunder proxies?
These tools act as a link between your computer and War Thunder servers. They reroute your internet traffic through their servers with alternate IP addresses.
Why is it essential to use War Thunder proxies?
Proxies are essential for War Thunder since they optimize gameplay. Accordingly, they reduce lag, minimize bandwidth throttling and prevent detection while using bots.
Contact us
Email was successfully sent.
Close
Error. Something went wrong.
Close
Please enter text longer than 20 symbols
Close